DURHAM, N.C. – Scientists have developed new geochemical tracers that can identify hydraulic fracturing flowback fluids that have been spilled or released into the environment.

The tracers, which were created by a team of U.S. and French researchers, have been field-tested at a spill site in West Virginia and downstream from an oil and gas brine wastewater treatment plant in Pennsylvania.

“This gives us new forensic tools to detect if ‘frac fluids’ are escaping into our water supply and what risks, if any, they might pose,” said Duke University geochemist Avner Vengosh, who co-led the research.

“By characterizing the isotopic and geochemical fingerprints of enriched boron and lithium in flowback water from hydraulic fracturing, we can now track the presence of frac fluids in the environment and distinguish them from wastewater coming from other sources, including conventional oil and gas wells,” Vengosh said. 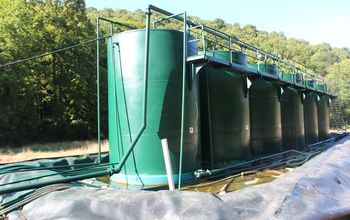 Using the tracers, scientists can determine where fracturing fluids have or haven’t been released to the environment and, ultimately, help identify ways to improve how shale gas wastewater is treated and disposed.

Vengosh and his colleagues published their peer-reviewed findings October 20 in the journal Environmental Science & Technology. Their study, which was funded in part by the National Science Foundation, is the first to report on the development of the boron and lithium tracers.

Nathaniel R. Warner, Obering Postdoctoral Fellow at Dartmouth College, was lead author of the study. “This new technology can be combined with other methods to identify specific instances of accidental releases to surface waters in areas of unconventional drilling,” he said. “It could benefit industry as well as federal and state agencies charged with monitoring water quality and protecting the environment.”

[dropshadowbox align=”none” effect=”lifted-both” width=”600px” height=”” background_color=”#ffffff” border_width=”1″ border_color=”#dddddd” ]“This gives us new forensic tools to detect if ‘frac fluids’ are escaping into our water supply and what risks, if any, they might pose,” said Duke University geochemist Avner Vengosh.[/dropshadowbox]

Hydraulic fracturing fluids, or frac fluids, typically contain mixes of water, proprietary chemicals and sand. Mixtures can vary from site to site. Drillers inject large volumes of the fluids down gas wells at high pressure to crack open shale formations deep underground and allow natural gas trapped within the shale to flow out and be extracted. After the shale has been fractured, the frac fluids flow back up the well to the surface along with the gas and highly saline brines from the shale formation.

Some people fear that toxic frac fluid chemicals in this flowback could contaminate nearby water supplies if flowback were accidentally spilled or insufficiently treated before being disposed of. 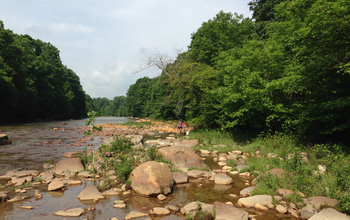 “The flowback fluid that returns to the surface becomes a waste that needs to be managed,” Vengosh explained. “Deep-well injection is the preferable disposal method, but injecting large volumes of wastewater into deep wells can cause earthquakes in sensitive areas and is not geologically available in some states. In Pennsylvania, much of the flowback is now recycled and reused, but a significant amount of it is still discharged into local streams or rivers.”

Vengosh said it’s possible to identify the presence of frac fluid in spilled or discharged flowback by tracing synthetic organic compounds that are added to the fluid before it’s injected down a well. But the proprietary nature of these chemicals, combined with their instability in the environment, limits the usefulness of such tracers.

By contrast, the new boron and lithium tracers remain stable in the environment. “The difference is that we are using tracers based on elements that occur naturally in shale formations,” Vengosh said. 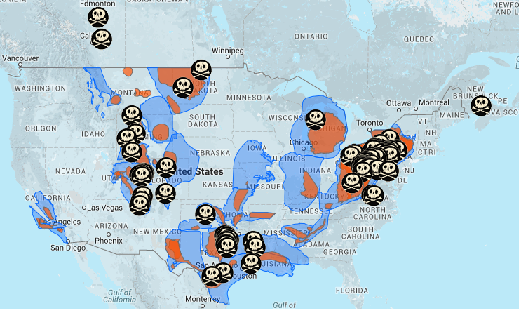 Find ‘Fraccidents” near you with interactive map. Image Courtesy: EarthJustice.org

When drillers inject frac fluids into a shale formation, they not only release hydrocarbon but also boron and lithium that are attached to clay minerals within the formation, he explained. As the fluids react and mix at depth, they become enriched in boron and lithium. As they are brought back to the surface, they have distinctive isotopic fingerprints that are different from other types of wastewater, including wastewater from a conventional gas or oil well, as well as from naturally occurring background water.

“This type of forensic research allows us to clearly delineate between the possible sources of wastewater contamination,” Vengosh said.