Science March in Charlotte, NC Informative, But Missed The Mark

Charlotte, NC – Charlotte’s popular Marshall Park sits just on the edge of downtown and gives a feeling of escape from the hustle and bustle of the ever growing metropolis around it. The breeze blew through the blossoming trees, and the splashing of the ducks in the man-made pond gave an effect that screamed “natural” and “Earthbound.” In the center sat a concrete amphitheatre where the Science March organizers, proudly wading through the crowd with their bright green Science March t-shirts, had set up a small podium and microphone for the speakers they had arranged.

About a thousand people wondered in and around the dozen tables set up across the park while the others took a seat on the stone steps facing the podiums. Signs peppered the lawn of Marshall covering topics mostly related to science, except for the one random Black Lives Matter sign we were pleased to see floating through the crowd. However, taking a step back and looking at the marchers as a whole, you mostly would notice nerdy 30-something dads with their teenage kids and packs of small children dressed in lab coats. 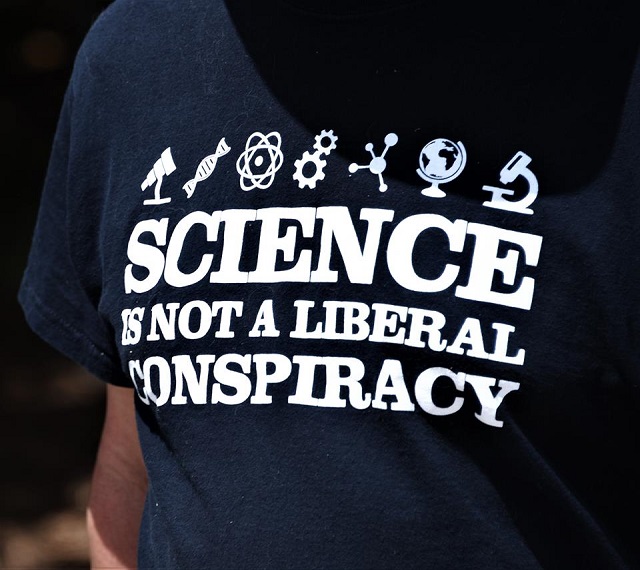 Music blasted from the speakers as the crowds quieted and waited for the rally to begin. Through the speeches, the Charlotte Science March offered up a plethora of speakers from all different walks of life. Brandon Turner from Bessemer City High School gave a riveting, yet slightly “magical” interpretation of NASA. During his speech he stated:

“The organization (NASA) was initially founded solely around the purpose of space exploration. Many people still believe that NASA only functions for that lone reason; however, this is not the case.”

He went on to talk about different programs NASA has been working on both related to exploration of our solar system and monitoring of our own little blue dot. He did mention the possible $100 million budget cut proposal by the Trump Administration but left out NASA’s history of programs based on governmental compliance.

From there, the stage was shared by members of the Woman’s March, Psychologists, and even a winemaker from New York. The most notable speaker was the director of the Origin’s Project and Professor in the School of Earth and Space Exploration and the Physics Department at Arizona State University, Lawrence Krauss, who stated:

“The free inquiry and creative activity we find in science and art reflect the best about what it means to be human.”

After the speeches were complete, the marchers lined up and began their onward pursuit to bring notoriety and awareness to the public on the plight of the scientific community.

Ten minutes later, the march was over having only been planned for a walk around a four square block radius, out of the reach of the public, and in front of mostly empty government buildings, and a church. While some questioned what the point of it was, others seemed happy just to be in an environment where like-minded people could gather to talk about the issues, show their scientific signs that didn’t make sense to the general non-scientific public, and collect their “cool” wristbands made of seeds. 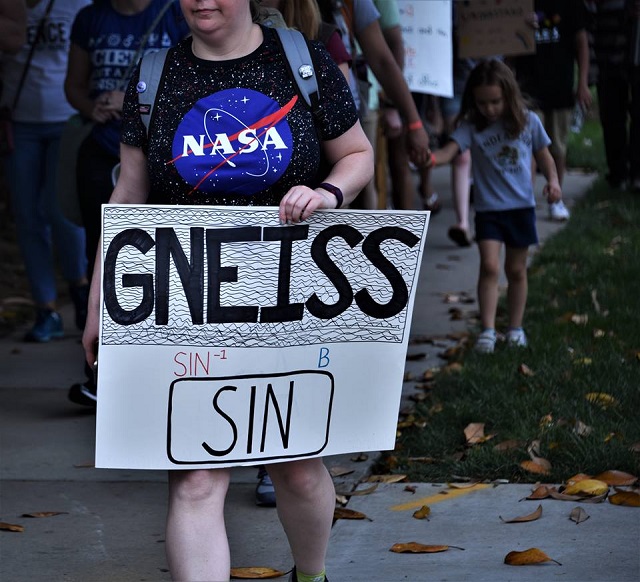 GreenActionNews, spoke with June Blotnick, the Executive Director of Clean Air Carolina, who despite the overwhelming avoidance of discussion on any political topics by the crowd and participants, was more than happy to share her wealth of knowledge. When asked about Scott Pruitt stating that “the American people are tired of seeing billions of dollars being drained from our economy due to unnecessary EPA regulations,” June said:

“No, [Trump] is lying when he says millions of Americans are tired of over-burdensome regulations. The people that are tired of that are the people that are polluting the environment… I think everybody in the Trump Administration is committed to supporting the fossil fuel industry and any kind of industries that have supported their businesses or their office if they are elected officials. ”

Ms Blotnick went on to talk about Charlotte’s fight with pollution based on transportation and gave a strong stand in support of the EPA. Blotnick stated:

“We’re very concerned about our friends in the EPA, and feel very bad that they’re going to have to be doing things they don’t really want to do.”

Clean Air Carolina is a major player in the environmental stewardship of both youth and adults, as well as, scientific research associated with the quality of air in North Carolina.

All in all, if you happened to catch the rally, it was very informative, non-political, and a pretty fun environment. However, as other Science Marches across the world showed, the point of it was to bring awareness to others and make your voice heard. We give credit where credit is due since putting together such a huge event can be difficult, time-consuming, and overwhelming but in the end, this march missed the mark.

Images via Michael Kline with The Quality Inherent.

Stephanie is a well-versed freelance writer and self-proclaimed environmentalist and activist hailing from Washington DC. She boasts ten plus years of writing experience for various publications and holds an MBA with a concentration in Sustainability. Her environmental passions range from climate change to sustainable living and she is constantly in search of the truth to share with her readers.