People who are trying to raise funds for a creative project or community cause are probably already aware of crowdfund websites like Indiegogo or Kickstarter. About $11.7 million had been raised for businesses using equity crowdfund platforms, according to NextGen Crowdfunding. There is a growing number of crowdfund sites that cater to niche interests. WorthWild is a fee-free crowdfund website for people involved in making a positive impact on environmental issues.

Co-Founded by Cori Snedecor and Kyle Pribish, WorthWild offers a unique twist on crowdfunding in that it is a fee-free platform. This means that fundraisers get to keep 100% of the funds they raise on the platform.

Fundraisers do have to pay for a 1-2.9% plus 30 cents WePay processing fee, which is typical of other crowdfund websites, but the thing that makes WorthWild different is that WorthWild does not receive any sort of commission on the funds raised nor on the processing fee.

In addition to the no-fee platform, WorthWild offers three different crowdfund options and advice on how to run a successful crowdfund campaign.

WorthWild accepts campaigns for a variety of groups and individuals including, nonprofits, schools, land trusts, businesses, students, educators, artists, conservationists, entrepreneurs, architects, researchers, outdoor adventurers, environmental leaders and anyone else who is seeking to fund a green project, idea, service or product.

Plus, once a fundraiser gets their campaign accepted to the WorthWild website, they are able to network with like-minded change agents who can champion each other’s work in environmental causes, a feature that goes beyond just raising funds.

Co-Founder Kyle Pribish, who currently serves on the board for the Metacomet Land Trust, attended nature camps each summer while growing up in Cape Cod. “I was always exploring nature, collecting cool things to look at,” said Pribish. “When I was eight years old, I started a lemonade stand to fund my first rock climbing adventure and that green-minded entrepreneurial spirit has stayed with me ever since.”

Early outdoor exploration also played a role in shaping Co-Founder Cori Snedecor’s interest in environmental causes. In high school, she participated in an expedition hosted by the National Outdoor Leadership School. “That really solidified my belief that the outdoors are a vital part of human life that needs conservation,” said Snedecor.

Snedecor has a background in working as a day camp naturalist, a clean energy grant writer and a manager at Recreational Equipment Incorporated (REI). Snedecor has recently illustrated Dino Auto

a children’s book about fossil fuels.

Pribish and Snedecor met when they were working together at REI. During that time, real estate developers were trying to acquire 200 acres of wildlife habitat and farmland near where they lived, and local residents wanted to preserve the property. Snedecor and Pribish led grassroots efforts that were successful in raising awareness and support for preserving the land, but funds were needed to secure the property, and they looked to crowdfunding websites that were available at the time.

WorthWild offers three campaign options. The 365 campaign offers supporters the opportunity to contribute to a cause on an ongoing basis, and there’s a traditional limited-time Crowdfund campaign option to raise a bunch of funds for a specific need that is deadline driven. In addition, there is a Pre-Launch option that allows fundraisers to have time to put together their video, marketing materials and team and before the campaign goes public. 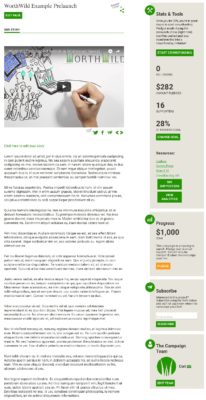 Example of what a WorthWild Prelaunch Fundraiser. Image Courtesy: WorthWild.com

WorthWild was founded in 2013 and has gone through multiple tests and improvements based on feedback. In December 2016, the site was re-launched with user tool improvements and enhancements to navigation. The site has had 20 campaigns so far. Nonprofits that have used WorthWild include The Kennebec Estuary Land Trust which raised 102% of their goal to raise money to preserve Squam Creek Preserve on Westport Island, Maine. And the Sudbury Valley Trustees (SVT) are trying to save 55 acres of conservation land that spans across two Massachusetts towns. With 24 days to go, the SVT has raised 40% of their goal so far with 112 supporters. The SVT crowdfund is using ‘flexible funding’, which means that the campaign will receive all funds raised even if they do not reach their goal of $40,000.

More than half of the environmental crowdfund campaigns have been nonprofits, the rest include grassroots organizations, individuals, benefit corporations, CSA farms and LLC’s, represented by educators, scientists, concerned residents, conservationists, and entrepreneurs.

WorthWild is a registered B-Corporation, which means that it is a for-profit company that meets rigorous standards of social and environmental performance, accountability, and transparency. WorthWild scores high in providing a platform that promotes public benefit and is designed to promote environmental causes. They also score high in an area many B-Corporations do not do as well, which is on governance (accountability and transparency). “Ironically, our score is low in “Environment,” because we don’t have a physical office, which means we don’t have much to point to in the way of physical resources in our facilities,” said Pribish.

Pribish and Snedecor say they are able to provide the WorthWild crowdfund service on a fee-free basis because they have side gigs to support themselves. Snedecor is a freelance web developer and designer, Pribish manages an open space parcel in Massachusetts while earning her degree in psychology.

“Someday we may look into monetizing the service in some way, but there are no concrete plans right now, and it’s not a discussion at this time,” said Pribish. “Given the current political landscape, we’re excited to offer our fee-free crowdfund platform to help ease some of the pressure of decreased government funding. Our number one priority is reducing barriers to environmental fundraising and spreading inspirational projects and ideas.”

To help fundraisers be successful, WorthWild requires fundraisers to include a video with their campaign. And WorthWild sends an email to fundraisers every day for 2 weeks with tips and information on running a being successful with the crowdfund campaign.

An important tip is that a successfully run crowdfund campaign depends on having a personal base network of involved supporters. Fundraisers who use the Pre-Launch feature are able to collect funds while getting valuable feedback on how to improve their campaign. It also means that by the time the campaign is launched on the Crowdfund option, they already have raised part of their funding goal.

Pribish said, “Research on crowdfunding shows that campaigns are about 20 percent more likely to reach their goal if they have 30 percent of their goal raised in the first couple of days.”

Because the fundraisers who use WorthWild are not offering a tangible product, some may see this as a barrier to achieving the kind of success seen on other crowdfund sites. But WorthWild founders have not seen this to be a problem, particularly because of the unique nature of the campaigns.

“Many of our campaigns don’t have a physical product they are selling, but that doesn’t mean they can’t offer something to their supporters,” said Pribish. Unique rewards that are related to the campaign and that you can’t get anywhere else do best.”

Some of the crowdfund rewards offered by fundraisers include professional photographs of the animals whose habitats have been saved, paintings of purchased conservation land by local artists, recycled candles and all natural body scrub created by the students at a school that benefited from a campaign, and gift certificates to local businesses that are supporting the project. Land trusts have expanded their membership base by offering memberships as a reward to new contributors.

“It’s been a labor of love,” said Pribish. The biggest challenge has probably been getting our name out there. We’re still getting the hang of it, but I think people are starting to see how valuable a tool our site is for environmental campaigns. And, it’s free! We’re excited to see where it goes.”