Nantes, France – Eco-activist Remi Fraisse died during a demonstration and the ensuing clash with police when between 2000 and 5000 protested the controversial Sivens dam project about 400 miles south of Paris. Police discovered Fraisse’s body at the site in the early hours of the morning October 26th.  The dam threatens the Sivens wetland and is intended to irrigate surrounding farms.

The night Fraisse was killed activists walked to the deforested area in a peaceful protest. A number of busloads of riot police awaited them.  Then 100 activists attired in black came at the police throwing rocks and Molotov cocktails. Four more busloads of police arrived as backup. The police responded with a volley of tear gas and stun grenades. The action ebbed and flowed all night. 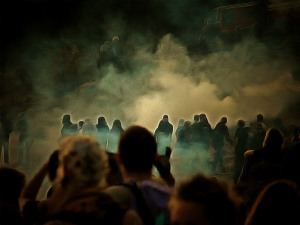 Would You Die For Your Cause?
Credit: Guy Masawi

As a result of Fraisse’s death, thousands of demonstrators gathered on Saturday, November 1st in Nantes, France. They arrived from all directions and congregated peacefully in the town’s center. But then some threw projectiles, and police responded by firing tear gas and stun grenades.

Those protesting Fraisse’s death carried signs that read, “Down With State Violence” and “Police Everywhere, Justice Nowhere.” Police dispersed the crowd of protesters with tear gas after several demonstrators vandalized a monument to the dead.

Investigators found traces of TNT on Fraisse’s clothing and skin. Autopsy results indicated that he died instantly when he was struck in the back by a grenade. But authorities have yet to deduce whether the grenade came from the police or the protesters.

The night of Fraisse’s death about 15 protesters were wounded from stun grenades, and two activists had head injuries caused by tear gas canisters and flash-balls.

Authorities suspended work on the damn after his death. People placed crosses at the location where Fraisse was discovered dead.

I founded Gloria Christie Reports, a common sense column about liberal politics. I have written for Addictinginfo.org, the Kansas City Star, Where High Technology Meets Politics for London’s IDG-Connect Blog and The Best Times. My total readership is over 5 million. I have an MS in radio-TV-film and an MPA in business/government relations. I am a systemic problems consulting expert for Fortune 100/500 businesses here and off-shore. I invented and implemented the first computerized patient chart.