EU – The 2013 Air Pollution Report, prepared by the European Environment Agency (EEA), found that emissions had not reduced as much as expected in the past 10 years. The final judgment is that European citizens often breathe air that does not meet the standards and Particulate Matter (PM), Ozone (O3), reactive nitrogen substances and some organic compounds still pose a significant threat. 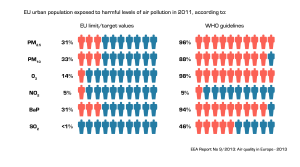 With an overview from 2002 to 2011, the report covers up to 38 European countries, including EU Member States and other EEA 27 member countries. Despite the progress and improvements of recent years, cutting emissions of several air pollutants in recent decades, reducing exposure substances as sulphur dioxide (SO2), carbon monoxide (CO), benzene (C6H6) and lead (Pb), the report shows how developing and implementing effective policy to reduce air pollution remains a priority.

EU has developed an extensive body of legislation, etablishing health based standards for many pollutants in the air and proposing measures for achieving them by 2020. The key elements of EU legislation (Air Quality Directives 2008/50/EC and 2004/107/ ) are EU limit values, set for individual pollutants, target values and exposure reduction obligation by a given per cent depending on the mean triennial Fine Particulate Matter from 2008-2010 to 2018-2020. However concentrations remained stable due to the complex links between emissions and air quality is above the limit and target values set in the EU legislation and guidelines suggested by World Health Organization (WHO).

Emission reductions do not always produce a corresponding drop in atmospheric concentrations, especially for Particulate Matter (PM) and Ozone, Europe’s most problematic pollutants in terms of harm to human health. So emission levels are not the only factor that determines concentrations of air pollutants. All play a role: weather, chemical transformations in the air, transport of pollutants. 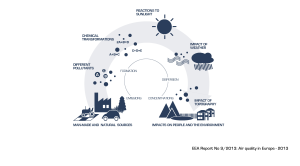 PM, originating form primary particles emitted directly and secondary produced as a result of chemical reactions, poses the greatest risk, penetrating into sensitive regions of the respiratory system and can lead to health problems and premature mortality. Ozone is a secondary pollutant, formed in the lower part of the atmosphere, but is an aggressive oxidising agent: elevated levels can also damage plants, leading to reduced agricultural crop yields and decreased forest growth, contributing also directly and indirectly to global warming.

The effects of poor air quality have been felt the most strongly in two areas:

Janez Potočnik, European Commissioner for the Environment noted that the EU’s latest analysis shows 420,000 premature deaths from air pollution in the EU in 2010, a figure that is “simply unacceptable” . “There are still major challenges to human health from poor air quality” Potočnik said  “we are still far from our objective to achieve levels of air quality that do not give rise to significant negative impacts on human health and the environment”.

I'm a journalist who has studied architecture or an architect who writes. I've a Master's Degree in History and Philosophy and a Master's Degree in Architecture. I developed my expertise is in Energy Saving, International Environmental Law, Urban Planning and Sustainable Water Management. As an architect I trust in sustainable living, as a historian in human development and in cooperation.