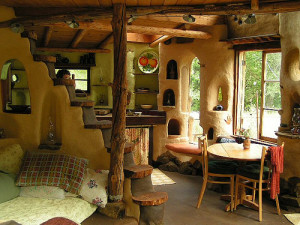 Imagine being able to build your own house, mortgage free, from simple materials that can be dug up from the ground. Cobbing is an ancient technique that has been thoroughly modernized thanks to decades of experimental buildings. Cob itself is made up of four different materials- sand, water, clay and straw, all of which are easily obtained from the land or for relatively low cost. The technique to getting a strong wall is vigorously mixing all ingredients to form a ‘mud’ which when dried is as strong as concrete. There are cob buildings still standing in England that are around 500 years old.The most important aspect to remember when working with cob is that it doesn’t like water- it can take a few thousand rainstorms but it cannot handle flooding; so if you live on or near a flood plain cob is not a wise choice. 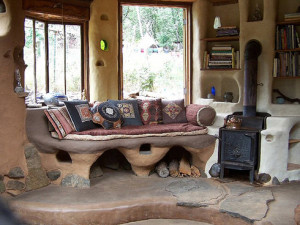 The beauty of cob is that it is literally a hand sculpted house- one can add benches and counters all sculpted into the walls.People carve out bookshelves and niches and add hand sculpted artwork to the walls. It is a non-toxic material that novices and experts alike can use with ease.

The only really tricky part of cob house building is the ‘hat and boots’ of the house; or the roof and foundation. Both of these need to be solid to keep the cob walls up out of the rain and to protect the walls from too much rain. It is ok if the walls get wet- just not saturated. Most people dig a trench around their house and fill it with gravel and a drainage pipe to aid water to be wicked away from the house. The foundations are usually constructed of stone- some people use found rock, some use “urbanite.” A trench is dug down to the frost line to insure that no shifting occurs and then the trench is filled with rock. After that the cobbing of the walls begins. To protect freshly cobbed walls from moisture burlap sacks or tarps are draped over the unfinished walls.

The roof of the house is a critical aspect too. The roof determines how durable your cob house will be. A good solid roof with wide eaves and a low overhang is best. Some build a slanted green roof as a way to heat and cool their house in temperature extremes. While cob has value as a passive thermal mass it is not very insulating. This means cob will hold heat or cold within its walls and release it slowly depending on the inside temperature. One way cob can be better insulated is using straw bales in between the walls on one or more sides. This provides added insulation and it is fire resistant because of the cob surrounding the straw. While this method of building is very labor intensive, the effort is offset by the relative low cost of the building materials. Windows and fixtures can be scavenged as cob lends itself to recycled and found materials. Nothing has to be specifically measured; windows may be sculpted into the cob walls themselves along with doors and door frames.

Hi everyone! I live in Grand Rapids MI. My free time is spent dreaming of my (future) self sufficient place out in the country. I am currently obsessed with permacultre and I am looking forward to spring so I can start my small garden.